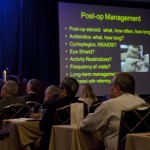 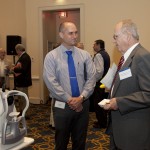 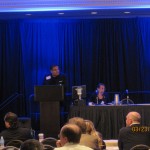 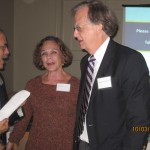 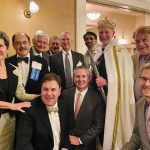 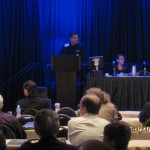 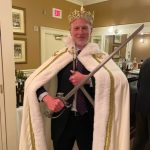 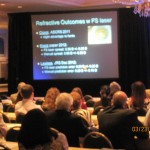 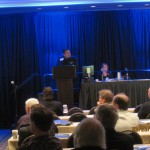 In 1976 our topic was Retinal Diseases, and among our speakers was the famed Dr. Arnall Patz.  Born in 1920 in Elberton, Georgia, Dr. Patz was the youngest of seven children in the only Jewish family in town.  He received both his bachelor’s and medical degrees from Emory University.

After a stint in the US Army serving at Walter Reed Army Medical Center, Dr. Patz began a residency in Ophthalmology in Washington DC at Gallinger Municipal Hospital (later known as DC General Hospital).

During the 1940s and early ’50s there was an epidemic of blindness among over 10,000 premature babies, which became one of the “great medical mysteries of the post-war era.”  While Dr. Patz was in training at Gallinger, he observed more than 20 infants who had developed severe retrolental fibroplasia after receiving continuous oxygen therapy.  This observation led him to hypothesize that there was a correlation between the blindness and the oxygen therapy commonly used to treat premature babies, and he set out to test this hypothesis with a clinical study.  Unable to obtain a grant from the NIH, which feared that the study would “kill a lot of babies”, Dr. Patz borrowed money from his family and conducted his study between 1951 and 1953.

The study found that those infants who received concentrated oxygen had a significantly higher chance of going blind than did those who received normal oxygen.  He further established that elevated oxygen levels caused abnormal growth of blood vessels in the eye, irreversibly damaging the retina.  After Dr. Patz’s findings became known, the use of high-dose oxygen therapy was limited and there was a 60% reduction in childhood blindness in the United States.

In the 60’s he conducted pioneering research on the use of lasers developed one of the first argon lasers used in the treatment of retinal disorders.  He also erected an 80 foot radio tower at his home so he could broadcast to ham radio operators across the country when corneas were needed for transplants.

Dr. Patz went on to join the Johns Hopkins University faculty as a research professor, and eventually served as the director of the Wilmer Eye Institute at Johns Hopkins for a decade.  He also founded the Johns Hopkins’ Retinal Vascular Center.  In 1994 he received the first ever Helen Keller prize for Vision Research, and in 2004 he was awarded the Presidential Medal of Freedom “for his lifetime contributions to the field of ophthalmology, including his discovery of the most common cause of childhood blindness in the early 1950s.”

Dr. Patz also served as president of the AAO and wrote more than 250 scientific publications and four textbooks.  In his later years he followed his passions and studied the impact of deafness on Beethoven’s music, and received a master’s degree in liberal arts from Johns Hopkins at age 78.  Dr. Patz died of heart disease in 2010 just one day before his 60th anniversary with his wife, Ellen.